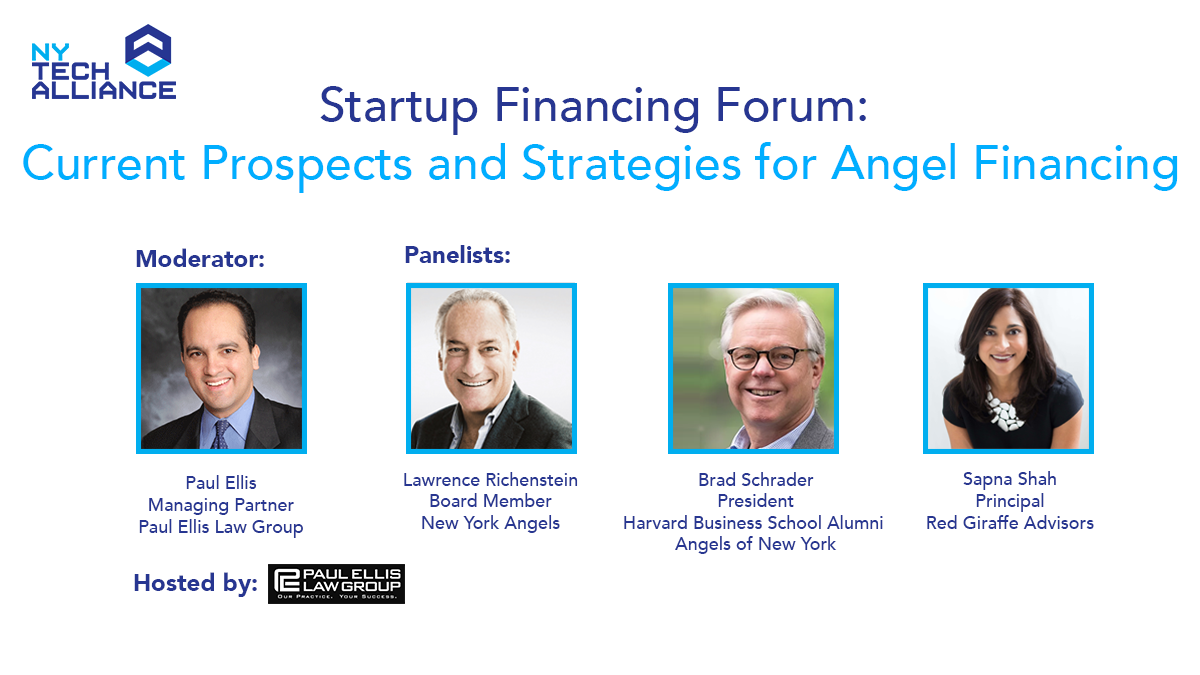 As COVID-19 continues to disrupt lives, the economy and our patterns of interaction, many startups are reporting that angel financing has continued to be attainable, and in some cases, a good alternative to early-stage VC financing. Please join us for a webinar featuring active angel investors and successful serial entrepreneurs. Together they will address the following topics:

The session will include plenty of time for the panelists to answer attendees’ questions.

As Managing Partner of the 8-lawyer firm, Paul Ellis Law Group, Paul counsels on issues including formation, early-stage and venture financing, joint venture and strategic partnering relationships, employment, equity plans, mergers and acquisitions, and, together with his colleagues, protection and licensing of intellectual property. Beyond the internet/mobile/IT industries, he has practiced in industries including telecommunications, healthcare, manufacturing, banking, real estate, consumer products and entertainment. He has represented companies ranging from startups to multinationals, as well as funds and individual and institutional investors. Paul is a board member of NY Tech Alliance and organizes its events on legal issues for startup through midsize tech companies. He holds a BA from Harvard and a JD from Georgetown.

Larry Richenstein is an entrepreneur, inventor, angel investor and mentor to early stage companies. He founded Unwired Technology LLC in 1996, which by 2003 had grown to become the world’s largest manufacturer of wireless headphones. In 2005 American Capital Strategies (ACAS) acquired a majority interest in Unwired, and the company was purchased in 2014 by Delphi Automotive.

Richenstein has invested in more than sixty early-stage companies, both on his own and as a member of New York Angels, one the country’s most active angel groups, where he became a member of its Board of Directors in 2013. He has served as a mentor to dozens of startup companies and regularly advises startup entrepreneurs. Richenstein is an advisor and Board member of BotFactory, a manufacturer of desktop PCB printers. Recently, Larry started a new B2B venture in energy harvesting generators, WePower Technologies LLC, www.wepowertechnologies.com.

Brad Schrader has led multiple B2B startups and turnarounds. He currently serves as Chief Strategy Officer at Sun Chemical and previously led EasyLink (Nasdaq: EASY). From start as an engineer, he has helped grow diverse businesses from fiber optics to airbags to specialty chemicals to eCommerce with BCG, Corning, TRW, Honeywell among others. He is an active venture adviser.

Sapna received her B.S. in Economics from the Wharton School as well as a B.A. in East Asian Studies from the College of Arts & Sciences at the University of Pennsylvania. She received her M.B.A. from Columbia Business School.